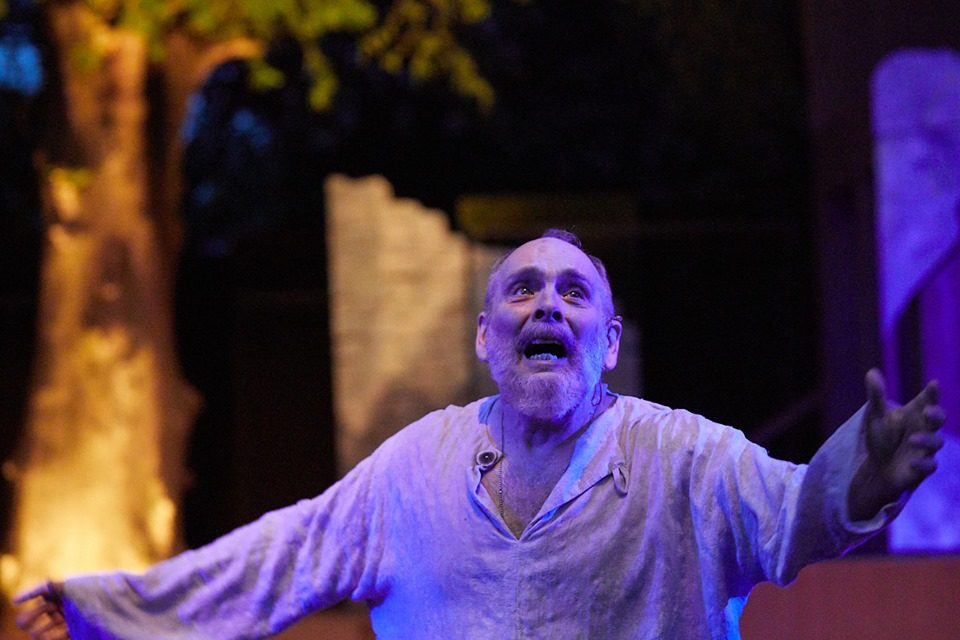 Entire contents are copyright © 2019 by Keith Waits, All rights reserved.

Among the greatest of the plays written by William Shakespeare, there are several titular roles that are each a veritable Mt. Everest for actors; Charlton Heston called them the “Man-killers”, and I doubt they are any easier for women. Of these, the monarch named Lear stands as a particularly daunting challenge. It has often been said that if you are old enough to truly understand the unique blend of aging, madness, and arrogance required to play it, you may be too old to pull it off onstage.

Jon Huffman seems ready. Within a few minutes, he follows this line: “…while we unburthen’d crawl toward death,” with a hearty laugh tinged with dread that serves notice to the audience to buckle up. Unlike other of Shakespeare’s kings, Lear is not following ambition – he has had the crown for a while, and he starts things off by parceling off the kingdom to his three daughters; this is a ruler who knows full well he approaches the end of his power. After demanding and receiving false declarations of love and loyalty from Goneril (Abigail Bailey Maupin) and Regan (Hallie Dizdarevic), he rages against youngest daughter Cordelia when she refuses to engage in such rank obsequiousness. He banishes her, proving the hubris and vanity that will give way to insanity.

Now that their lands are secured, the other two waste no time forsaking their father under the guise of reason, while Gloucester (Jennifer Pennington) seeks to not be disloyal to any of them, a walk along the razor’s edge that will cost her dearly, and her duplicitous bastard son Edmund (Braden Campbell) betrays her by accusing legitimate son Edgar (Neill Robertson) of treachery.

I not very long ago watched some notable Lears by famous actors, and it occurs to me that there is often an assumption of familiarity that can rob the audience of a sense of discovery. Gregory Maupin’s cutting and Matt Wallace’s direction seek to deliver the Lear that Shakespeare promised, and it arrives fresh and brimming with insight, a new experience for all. I felt like I was hearing many of these lines for the first time.

It is a familiar plot, and I won’t belabor it more, but watching Mr. Huffman rage against the dying of the light resonates with one’s own first-hand experiences of bearing witness to the indignities of aging out of a meaningful role in society, even if it is not monarchs that we know. Lear is magisterial when he enters, a cloak surrounding his head with a lion’s mane, and he has the righteous authority of Providence. Although he is angered by the actions of his faithless progeny, he also surrenders willingly to the void. Shakespeare doesn’t provide many transitions for the character, and why he doesn’t retreat to his own home with his 100 men and sulk is never satisfactorily answered.

One answer is that Shakespeare wanted to explore the chaos of a mind disconnected from reality. In giving away his lands Lear has also relinquished his identity, and his tragedy is that he fails to recognize this until it is too late.

The always-excellent Donna Lawrence-Downs provides that regal mane and much more in the costumes, and Karl Anderson augments the wood construction with modest suggestions of stone and one magnificent staircase just for this production, for Lear to ascend and for others to hide under. All of the design work establishes the more primitive setting that is Ancient Britain BCE.

Abigail Bailey Maupin and Hallie Dizdarevic provide an interesting contrast as Goneril and Regan. In their first scene together, Ms. Bailey Maupin commands with the easy, assumed authority of the eldest, while Ms. Dizdarevic’s movements are led from the hips, the second born circling her sister warily while her scheming eyes are already plotting. Dizdarevic’s work this summer with this company has been especially strong.

Casting Tom Luce as The Fool is inspired, providing him the opportunity to break out of the authoritarian figures he has played recently and he has great fun onstage. Playing against Mr. Huffman, one can see Luce’s Fool as a foreshadowing of Lear’s tender dotage in later scenes.

As for the Gloucester family, Jennifer Pennington is smart and forceful enough to render moot any question about gender swapping, while Braden McCampbell is forthright as Edmund. If he doesn’t seem as evil as other Edmunds…well, there is plenty of villainy at work here, and Edmund is the only one given the opportunity for remorse. Neill Robertson is the legitimate son, Edgar, which means he is also “Poor Tom”, banished as a result of Edmund’s accusations.

Neill Robertson has established himself as a rare talent, and he gives Poor Tom a rich and expressive physicality. He arrives at Lear’s side just before his own final hold on reason is relinquished, perhaps another example to the king of the appeal of insanity. Shakespeare inserts great wit and levity in these moments of tragedy and dissolution; is there a better example of the notion in theatre that tragedy and farce are in fact kindred spirits? Yet I couldn’t help but feel that Wallace and Robertson push it too far, allowing the slapstick to dominate the scene and throw the tone momentarily out of balance. It is crowd-pleasing to be sure, and never sloppy (I’m not certain if Robertson is capable of sloppy), but still a misjudgment.

The remaining ensemble members acquit themselves admirably. Kentucky Shakespeare’s company provides a deep bench, so that Jon Patrick O’ Brien’s Cornwall and Dathan Hooper’s Kent enjoy a confrontation filled with humor that articulates the fickle sensibility of the ruling class, and Gregory Maupin can illustrate both the “milk-livered man” that is Albany in the early scenes, but then turn the seemingly inconsequential character into the last man of honor by simply speaking the words with integrity. Amber Avant is a true and stalwart Cordelia, doing what she can with a role that offers less than its station. Jon Becraft, J. Barrett Cooper, Will DeVary, Angelica Santiago, and Crystian Wiltshire complete the roster, and you will not find a misstep among them.

All of which is to say that Mr. Huffman’s performance is more than ably supported. His Lear is from a classic mold, which befits this actor’s well-established reverence for tradition, but it must also be, and is most certainly, all his own. Lear’s descent might be played as individual stops delivered with sudden shock at each new arrival, but Huffman carries crucial notes from each proceeding scene into the next so that we see the impact beyond the rage when Goneril and Regan are dismissive. We witness him weaken even while he rails against them with great righteous indignation. In his final, heartbreaking moments, we see what might have been the younger king: a responsible leader who was perhaps not as loving and tender a father as he wished, but still a good man. Huffman’s King Lear must be counted a personal triumph for the actor, but also the fullest realization of what Kentucky Shakespeare is all about.

The Tragedy of King Lear

Keith Waits is a native of Louisville who works at Louisville Visual Art during the days, including being the host of LVA’s Artebella On The Radio on WXOX 97.1 FM / ARTxFM.com, but spends most of his evenings indulging his taste for theatre, music and visual arts. His work has appeared in Pure Uncut Candy, TheatreLouisville, and Louisville Mojo. He is now Managing Editor for Arts-Louisville.com.